A day in the life of…Damo – Motion Director at Torpedo. 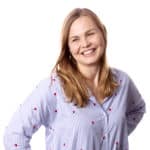 How do you get an authentic account of what life’s like at Torpedo? You get it straight from the horse’s mouth. In the spotlight this time round is our Motion Director, Damo. Read on to learn about his role, his experience and his Torpedo highlights…so far!

I am the Motion Director and I have been with Torpedo since 2017. Previously, I spent 10 years at ITV and 15 years working as a freelancer.

My role is to make sure that all the motion projects run smoothly, to plan live action shoots and to manage the Motion Team here at Torpedo. The Motion Team is a cross-account department and we work for all of Torpedo’s clients, creating films, animations and AR/VR videos. The team consists of Animators, 3D Designers, Filmmakers and Video Editors.

My typical day is never typical! One day I might be producing a film in Madeira and the next day I may be overseeing the creation of 300 GIFs or writing a complicated risk assessment for a live action shoot.

I love the variety of the work and the people I work with are all great (and that isn’t something you can always say about a company). There’s a real enthusiasm to create great work here, and that comes from myself, my colleagues and our clients.

The highlight of my day is creating, or seeing something the team has created. It always makes me feel proud to be at Torpedo.

“ There’s a real enthusiasm to create great work here, and that comes from myself, my colleagues and our clients. ”

I am very involved as a manager and the most challenging thing for me is stepping back and letting the team create more amazing work.

Everything we do really – from animation and 3D design to live action. But if I had to look personally, I think the ‘Lightroom Stories’ campaigns we have been doing since I joined in 2017. We have created some amazing live action films with some very talented people and it’s always been a project very close to my heart.

“ We have created some amazing live action films with some very talented people – ‘Lightroom Stories’ has always been a project very close to my heart.” ”

I wanted to be an actor like my mum and dad! My mum was a stage actor in Oxford at the Playhouse and my dad was in TV and films. But then I realised I preferred the other side of the camera, and that set me off on my journey of getting into TV.

If you weren’t a motion director, what do you think you’d be?

A tramp – ha ha ha! I have no idea, I am quite loud and a little rough around the edges, so I think I’d be a good tradesman.

So, from fifteen I worked for a small production company as their runner and that lit the flame of ambition for me. I wanted to work for ITV. I went and studied Art, and then Media, and landed a job as the first male News Assistant in ITV. Basically, I timed live programmes and made sure they ran to time. In my 10 years at ITV I was Senior Editor, Entertainment Reporter, and Producer. I then spent 15 years freelancing in film, editing and production for some huge brand names. And all that eventually led me to Torpedo.

Filming for 24 hours in Norway (with a great team) and racing to catch our flight. The main route to the airport was blocked and we took a 23-mile detour which included a ferry crossing and some comedy driving. I literally threw the keys at the rental company, but we made the flight, just.

What’s the best piece of professional advice you’ve ever been given?

Be you, be nice and enjoy what you do. And work hard, of course!!

Are your sustainability efforts going unnoticed?

Go the Distance Challenge 2022- The Results!

A day in the life of…Aidan – Senior Account Manager at Torpedo.